Women in Livingston in the 1970s

As it is International Women’s Day on Friday the 8th March, I thought I would look at how women are portrayed in these Visitor Reports, and then take a wider look at women in Livingston in the 1970s.
One of the reasons I like these assistant housing visitor reports so much is due to the way they capture reflect the way out society has changed in the last forty years. This week, I thought I’d look at the changing role and perception of women. In previous entries women are mentioned in ways which, I hope, reflects how much things have changed since the 1970s, when the 1950s ideal of a housewife still held sway...
There were three comments that jumped out at me:
“It is now obvious that a percentage of women work either part time of full time and that it is not possible to make contact with them during working hours. Perhaps evening visiting might be considered in appropriate cases.”
This implies to me that the housing visitor is expecting to find a woman at home at every house at which she calls. As though it is a shock that they are out working... Then this is followed up by -
“It would appear that there is a shortage of jobs for the under twenties as well as part-time work for women and according to tenants, the Department of Employment & Productivity hold out very little hope of any immediate improvement.”
Which again implies how women really only work part time, definitely a sign of an age before it was considered women could have careers and a family. Finally comes this comment -
“Three homes were revisited because the assistant housing officer considered on her first visit that the women were unsettled and depressed.”
﻿ ﻿

Although probably an issue for all women across the country at home all day with the baby,  this last issue was particularly acute in Livingston because the population was made up of immigrants, people who had moved away from their friends and family to start a new life in Livingston. This meant that, for all the women not out working, they could not call on their parents friends. There, was, also, at the beginning, a lack of established groups and societies. The problem was such that Leslie Higgs, Livingston Development Corporation’s head of Housing and Social Relations for twenty years summed up the problem like this:
“It cannot be overstressed enough that probably one of the greatest problems facing community workers in new towns is the housewife with a baby to look after and who is then unable to take a job, or has to leave one, and is then alone all day.”
Given all that, I thought I would have a root around in the archive to see if I could find any other records which reflect how women were living their lives in Livingston in the 1970s.
Firstly, some statistics for you. Livingston Development Corporation was great at collecting statistics as it had to plan services and future developments in the town around its population. An example of this is that when the town was first occupied, it had a very young age structure. As the town matured, so did its population and suddenly the town needed to provide such facilities as day centres for the elderly. Anyway, as a result of this planning there are plenty of statistics available on Livingston. Here are some stats from the Livingston Household survey in 1977 (which includes comparative information from the 1972 survey too) on employment:
In 1972, 34% of Livingston’s population was a “working population” – of that 34%, a third were women. So, assuming a total population  of 50% men and 50% women (and also assuming that I have got my maths right!), only 1 in 5 women in 1972 were looking for, or already in work. Another stat from 1972 – women made up 94% of part time workers, although that figure is still about 75% today across the UK, it shows how women were expected to look after the kids.
Another comment from the Household Survey comes in the recreation section. Whilst teenagers were apparently outdoors (an age before computer games...), and OAPs were gardening, “women were more likely to be home doing housework, knitting or reading.”
That’s in the evening, but what about during the day? Moving away from the Household Survey, there were a variety of groups set up in Livingston and a lot of them were aimed at women. Take, for example, the short course run by the Electrical Association for Women. The course was intended for “students of any age, many of whom may have no formal knowledge of science or electricity. It is intended that they handle as many appliances as possible and do practical work such as meter reading, rewiring a fuse, wiring a 13 amp plug. The information given, must, of course, but accurate but it should not be too technical otherwise the students will get bored.”
For some reason this group flopped the first time it was run in 1973.
Finally, to take us back to International Women’s Day I thought I would have a quick look at... “Women’s Fayre”, events held as part International Women’s Year (more information on which can be found in our collections in LDC/PS/3/3/37/7) 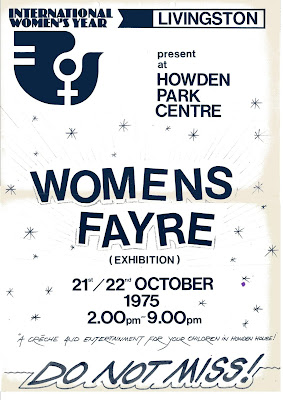 Livingston was one of five towns in Scotland to hold 2 days of events over the 21st and 22nd October. In Livingston the fayre was held at Howden House.  Over the two days 2000 people attended the event and it raised £173.57 which went towards the International Women’s Year African Water and Indian Literacy projects.
Again, reflecting slightly different attitudes at the time (and not just relating to women), notes for possible stalls at the event included:
“Police: recruitment effort Community Liaison information, attractive policewomen for help with stewarding etc?”
“Knitting Machine demonstrations and mannequin parade”
“Scottish Gas Board Demonstrations of economic cooking”
“Demonstration by Beautician from Bangour Hosptial...”
I  have been slightly cruel there, because there were plenty of stalls that are perhaps a bit more positive, the Department of Employment was there to talk about retraining, equal pay and equal opportunities for women for example, whilst Livingston’s Voluntary Organisation’s Council had a stall to try and channel people into voluntary groups in Livingston. Bangour hospital, as well as there to give beauty courses, were also appealing for new nurses, or trying to get old nurses to return to work.

In fact, 40 groups expressed willingness to be involved in the exhibition “to draw attention to women’s needs, publicise their potential role in society, and enlighten them of the prospects open to women who want to work voluntarily or for payment.”
So, although the Housing Visitor still expected to find the majority of women at home when she called at a house, times were a-changing. How much they have changed is, of course, open to debate.
Posted by Unknown at 09:07